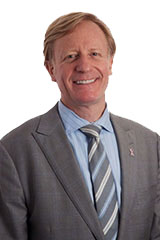 Make a booking with Ian now

Ian has a deep understanding of the complexities of business insolvency and reconstruction. He is a Registered Company Liquidator and an Official Liquidator of the Supreme Court of New South Wales and Federal Court of Australia.

Ian’s track record in insolvency and reconstruction over the past 30 years, including 10 years with PricewaterhouseCoopers and as a principal in a large specialist insolvency firm, has earned him an enviable and well-deserved reputation amongst his peers.

Ian’s reputation extends outside the industry and he is often called upon by the media (press, television and radio) to comment on topical insolvency matters. He is a regular contributor to 2GB’s Money News program and Channel Nine with finance expert Ross Greenwood and to Peter Switzer’s Grow Your Business TV program on Sky News Business.

Ian is also a member of the Financial Reporting Council (FRC), the peak body responsible for overseeing the effectiveness of the financial reporting framework in Australia and a director of SVP Group Pty Limited.

Ian organises the annual Australian Accountants, Lawyers and Directors Conference in Aspen, Colorado, of which SV Partners is proud to be the principal sponsor.

Ian has an extensive experience over a broad range of industries. He has conducted or been involved in successful administrations for many small, medium and large sized businesses with turnovers ranging from under  $100,000 per annum to over $100,000,000 per annum, and staff numbers from 1 to over 500.

Ian believes the key to helping a company and all stakeholders including employees, secured creditors and unsecured creditors is the need to listen carefully, thus enabling him to understand the business and formulate a structured strategy to achieve the best outcome for the creditors and owners.